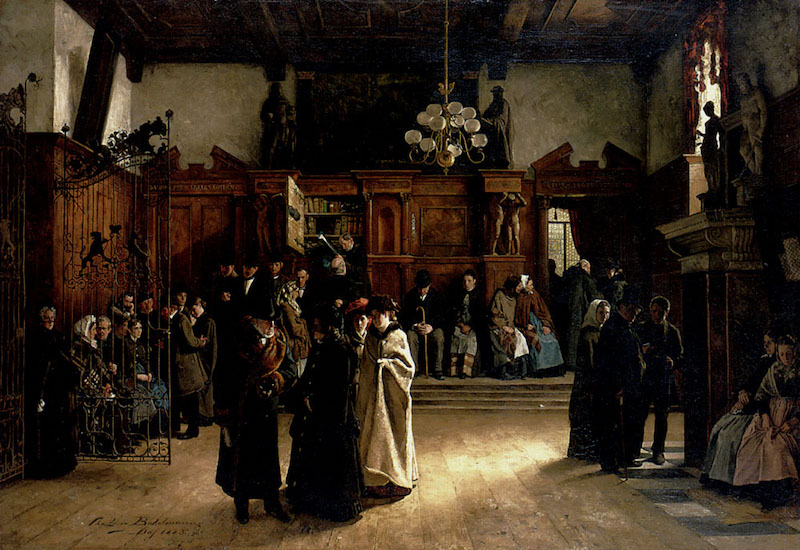 Middlemarch is a bit of an enigma to me because it takes what might otherwise be cliché characters, piously canting through detail-dense scenes, and turns them into nuanced, morally knotty, mistake-prone humans just like ourselves.

George Eliot is exceptionally committed to showing compassion towards all the characters, and to coaxing it from her readers as well. And because perception is necessary for compassion (if you don’t see, you can’t very well care), Eliot takes pains to introduce us to vexatious people in a lovable way. I believe it was her goal to help us see people who seem to us to be greatly misled and even vulgar, in a clearer or better light.

I see this in her representation of Mrs. Cadwallader, who arbitrates village matches and gossips about everyone else’s business. To me she would at once appear as a frightfully annoying, meddlesome vicar’s wife, yet Eliot insists that there is almost always a motive that seems good, at least to the person motivated by it. We are asked to closely observe human nature and vicariously feel the goodness that comes with successfully bringing the socially congruous partners together. She does this with multiple characters in various situations and somehow even when we don’t agree, we can understand and feel the reasoning. Mrs. Cadwallader is a sort of social glue.

Whilst speaking of her writing, Eliot penned, in an 1859 letter to a friend, “The only effect I ardently long to produce by my writings, is that those who read them should be better able to imagine and to feel the pains and the joys of those who differ from themselves.” She did just that, writing of young, disappointed love, the resignations of middle age, and the resentful ruin of the old who have not been wise. With keen perception, she shows us that for anyone to really see another, they must somehow get past the nearsightedness of their own selves.

Let us take for example, Eliot’s characterization of Dorothea. At first she appears fickle and needlessly martyrish, but soon we begin to see traces of ourselves in her. Many of us Gen-Zers have ardent, compassionate souls that yearn to do good if only to have a significant existence outside of moderate wealth, security, and social expectations. In fact, many of us are willing to sacrifice our prospects and even our persons so that we can live in the reality that we made a difference and we count. Yet we end up making spectacularly little difference with our petty or unwise sacrifices that help nobody in particular despite our good intentions.

And should we find ourselves justifying by reasoning that we are not living “to be seen of men” but out of the simple goodness of a charitable heart, we may once again find ourselves on equal footing with Dorothea. As Eliot writes, “Dorothea herself had no dreams of being praised above other women, feeling that there was always something better which she might have done if she had only been better and known better.”

She is constantly trying to make the world better for others and living to love her neighbor as herself. We do well to echo parts of this, to feel that we do not need to be praised above others, simply to help and be worth our salt. Yet there is a growing lot of us helplessly lost, hollow, and uncertain, whose rising wail is, “If only, if only,” and the societal results are not encouraging. What is it in Dorothea’s good desires that is missing? Ones true self and ones view of self is often very hard to differentiate. Was Dorothea’s identification with or empathetic love of her neighbor enough? Was not there some subconscious efforts at self fulfillment and a searching for meaning and place?

As I read Middlemarch, this bit stood out to me; perhaps above all the others, “Will not a tiny speck very close to our vision blot out the glory of the world, and leave only a margin by which we see the blot? I know no speck so troublesome as self” (Chapter XLII).

Too often when we try to see others, we see only ourselves; haloed by the light of the glorious world and appearing to ourselves as quite wonderful. All through Middlemarch, in Dorothea as well as others, Eliot lends us something of a distance. We are directed to assess mistakes while often being compelled not to ignore, but to honestly see something of self, removed from close proximity to ourselves and deprived of the pseudo-halo we are apt to enjoy. In other words, we are led to compassion.

But do we who “come to feel the pains and joys of those who differ from themselves” find that this alone fulfills our soul desires? More specifically, as one who writes, should this be “the only effect I ardently long to produce by my writings”?

I think of the wise man in Ecclesiastes who says, “Let us hear the conclusion of the whole matter: Fear God, and keep his commandments: for this is the whole duty of man.” And of those commandments, loving one’s neighbor is paramount, and not separable from the “God who worketh within you both to will and to do His good pleasure.”

It is then clear to me that compassion and a certain de-escalation of ego is extremely important to fully understand our own experiences and that it takes all that we have experienced to make us who we are. Yet that is not enough to make us all that we should be, and there is only one man who can help us there. That man the author of Middlemarch, with all her keen insight and kind intent, did not believe in. Perhaps because of this, all her characters (with the exception of Caleb Garth who seems to live in an existence somewhat apart, even from the author herself) have a hollow ring when you tap on their souls with a curious or critical finger. Almost without exception they want what is good, but in most cases, lack the power to achieve it. The suggestion in Middlemarch is that we can not possibly be all that we might have been or have dreamed of being; but that still, the unrealized life should be tried for, even unsuccessfully.

Is it then our effort toward a good goal, rather than the achievement of it, that makes us who we are? Are we, in the end, victims of our circumstances, puppets of an evil fate? Are we vindicated by good desires and justified by moral cognitive patterns? There is a gulf of meaninglessness in that speculation that would swallow the best of us alive. No, the human choice has a larger consequence that transcends into immortality. It is neither fate nor our neighbor who is responsible for our outcome or our soul. The responsibility lays at our own door. And that responsibility is too large for the best of us to carry alone.

Grace Martin dabbles in dragon lore and drinks too much tea in her efforts to understand the impossibly illusive nature of the world in which she lives and must help to beautify.